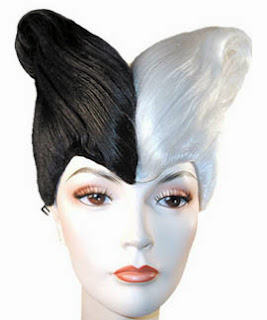 Everyone knows that you can have a great costume idea, however, without the right accessories; you won't have the desired effect. Wigs can make a unique costume even better, which is why this time of year is so exciting for us here at WigSalon. We have an incredible selection of wigs for any Halloween costume you can imagine. For example, Lady Gaga has long been a favorite, and her fans are tried-and-true Monsters, as she likes to call them. Our Lady Gaga wigs are the perfect choice for creating a Lady Gaga costume that will surely grab the attention of everyone you meet at your big Halloween party.

According to Chris March, who is well-known for his inventive wigs, every great costume starts with the wig. His focus has been on wigs that are light-weight and comfortable, which makes them perfect for any Halloween party or even trick-or-treating with the kids. March has worked with stars such as Beyoncé and Madonna, and he stands behind his wig promotion, stating that they "...give you confidence and make you feel powerful."

A quick peek at our Halloween collection will show you just how much variety we have when it comes to finding the perfect wig. Whether you're planning on hosting a Halloween party at your home, or you just want to do something special to entertain your kids this Halloween, you'll find the perfect wig for you. Don't let another year go by without wearing that great costume you've always wanted to wear. Check out are exclusive collection of costume wigs today!
Posted by moonsupport at 9:44 PM 0 comments

Halloween is creeping up fast. Have you thought about your costume? If not, it’s time to add “order costume” to your to-do list before this year’s best costumes and Halloween wigs are snapped up. Choosing the right wig can make the difference between a ho-hum costume and a head-turner.

Rocking a great Halloween costume is about losing yourself in the character. Hair is as important as makeup and clothing in creating a believable alter ego. The right costume wig from WigSalon.com will add authenticity to your costume, allowing you to embrace your new persona with panache.

Halloween is one of the few opportunities adults have to indulge their fantasies, if only for an evening. Who do you want to be? A haughty queen, ruthless Viking king, super hero, flesh-eating zombie or a dangerous gangster? Hit movies and popular television shows typically inspire the year’s most popular adult Halloween costumes.

This year the popularity of Game of Thrones on HBO and Starz’ The White Queen has created demand for medieval royalty costumes. Our fascination with A&E’s Duck Dynasty is expected to cause a run on long, full face beards.

The Great Gatsby and Boardwalk Empire have renewed interest in flapper and gangster costumes. New films in the super hero and Star Trek franchises continue to drive demand for these perennial perennial costume & party wig favorites. And for traditionalists, Zombies, given a boost by World War Z, are expected to push vampires out of the spotlight this year.


Whatever you decide to be this Halloween, you’ll find the perfect costume wigs at WigSalon.com.
Posted by moonsupport at 8:35 AM 0 comments